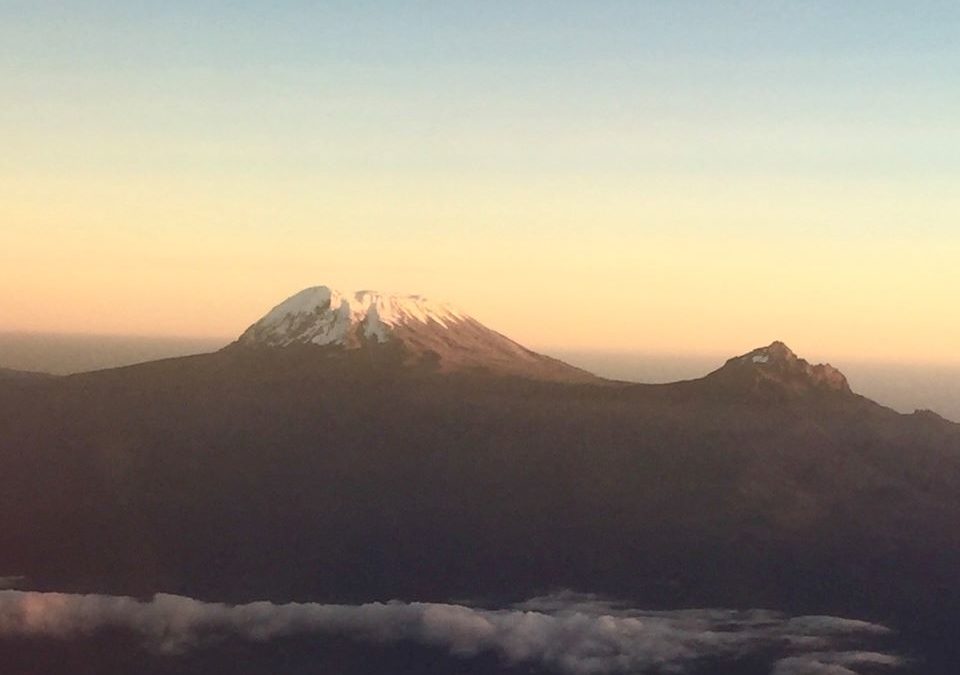 Beyond excited as we are flying to Tanzania, a country which until recently, we called our second home.

An ideal bush2beach destination where guests can watch the mighty herds of the Great Migration thunder across the Serengeti plains, ending their unforgettable safari with a quiet beach holiday on the island of Zanzibar, the exhilaratingly beautiful and exotic Spice Island. 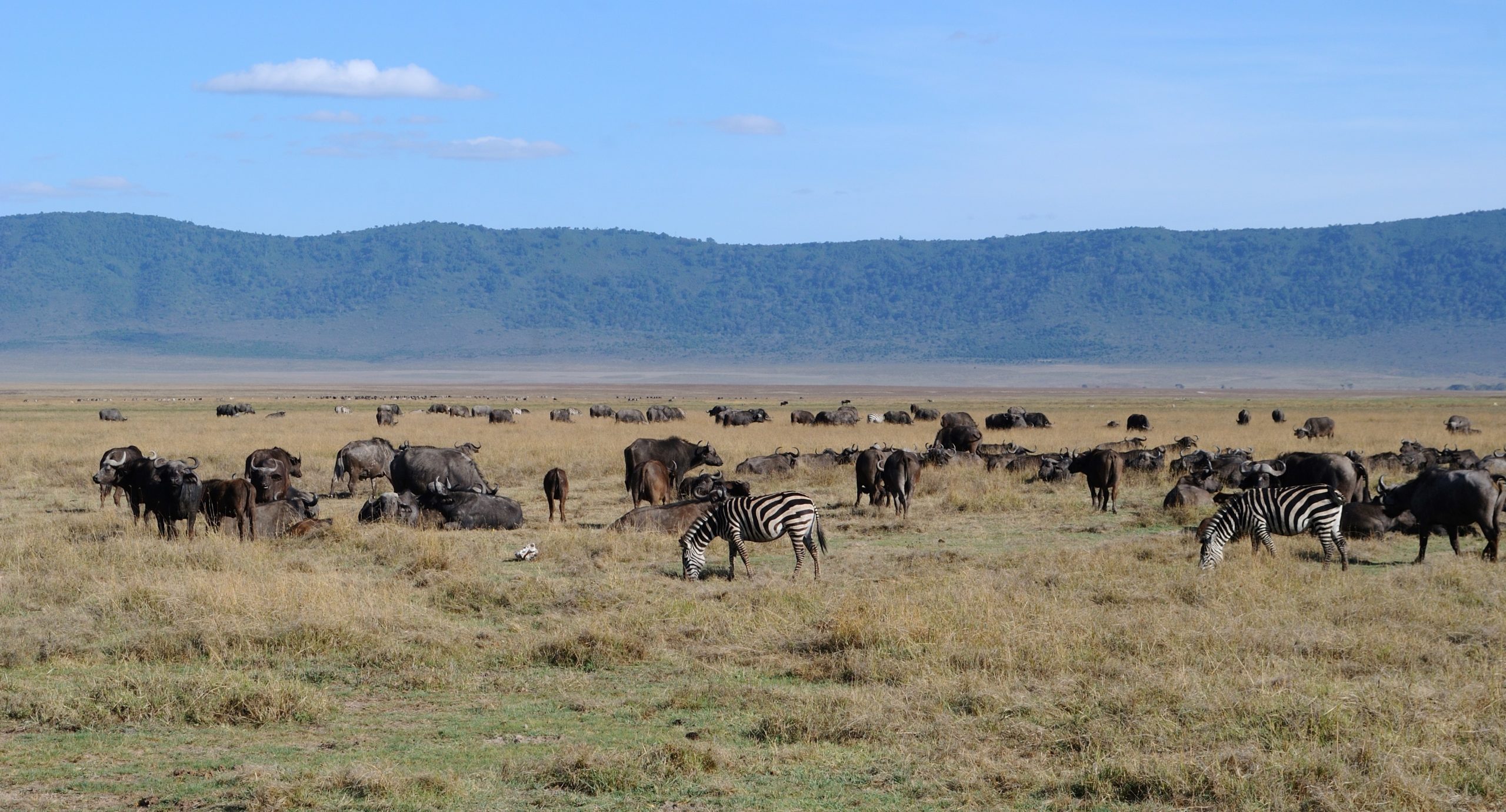 We hit the ground running with a game drive

The Ngorongoro Crater on the edge of the Serengeti was formed when a volcanic mountain collapsed. The crater floor is at about 1,700 meters above sea-level with a diameter of 17 to 21 kilometers and the crater rim has an altitude of 2,300 meters. Due to the different altitudes and the dynamics of the air masses, the climate varies greatly. The altitudes are mostly humid and hazy, the lowlands are subject to strong temperature fluctuations. The crater edges are covered with bush and remnants of mountain forests. The crater floor is covered by short grass savannah, waterholes and acacia forests. About 25,000 large mammals populate the crater, including the highest predator density in Africa.

We were blown away with sightings of zebras, buffalo, wildebeest, eland as well as Grant and Thomson gazelles which are constantly preyed on by lions, spotted hyenas and leopards. The crater is also home to elephants, hippos and to the endangered black rhinoceros, with around 10 to 15 animals left.

The following day took us to Lake Manyara

The next morning we left again and had the opportunity to admire the beautiful landscape during the drive to Lake Manyara. Lake Manyara National Park offers a wilderness experience of different habitats, from the Rift Valley, Soda Lake to dense mountain forests and steep mountain slopes. The park is known for its unusual tree-climbing lions and herds of elephants, hence its establishment to protect them.

A bird-lovers paradise with over 400 species of birds, including hornbills and ducklings. Lesser flamingos can occur in their thousands and cover Lake Manyara with a pale pink carpet and not to forget the pink pelicans, storks and cormorants as well as 44 species of diurnal birds of prey, including palm vultures. Just when you think it’s all over, there are still reptiles to be spotted, the Nile monitor, often seen along rivers, and some species of cobra. 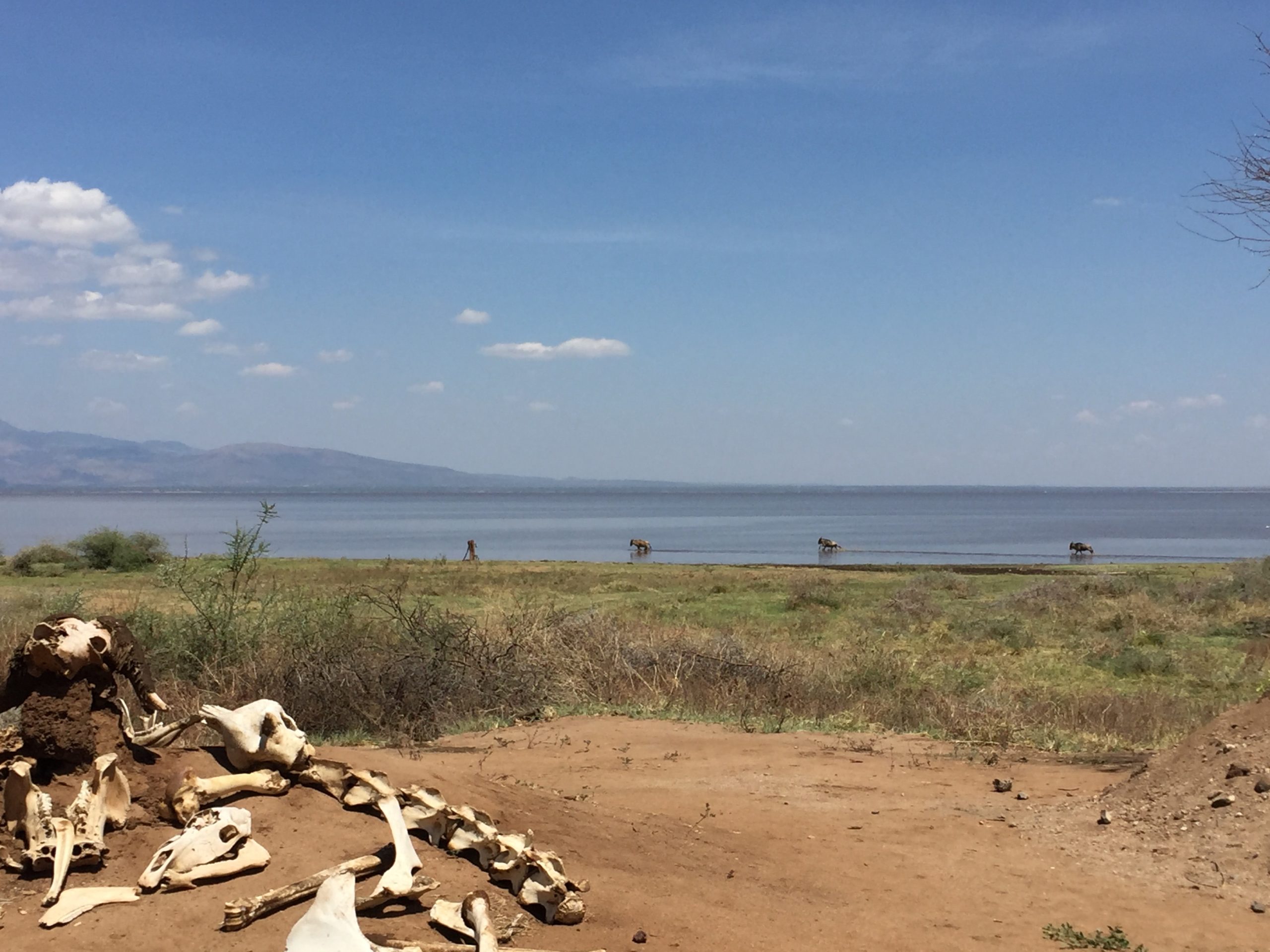 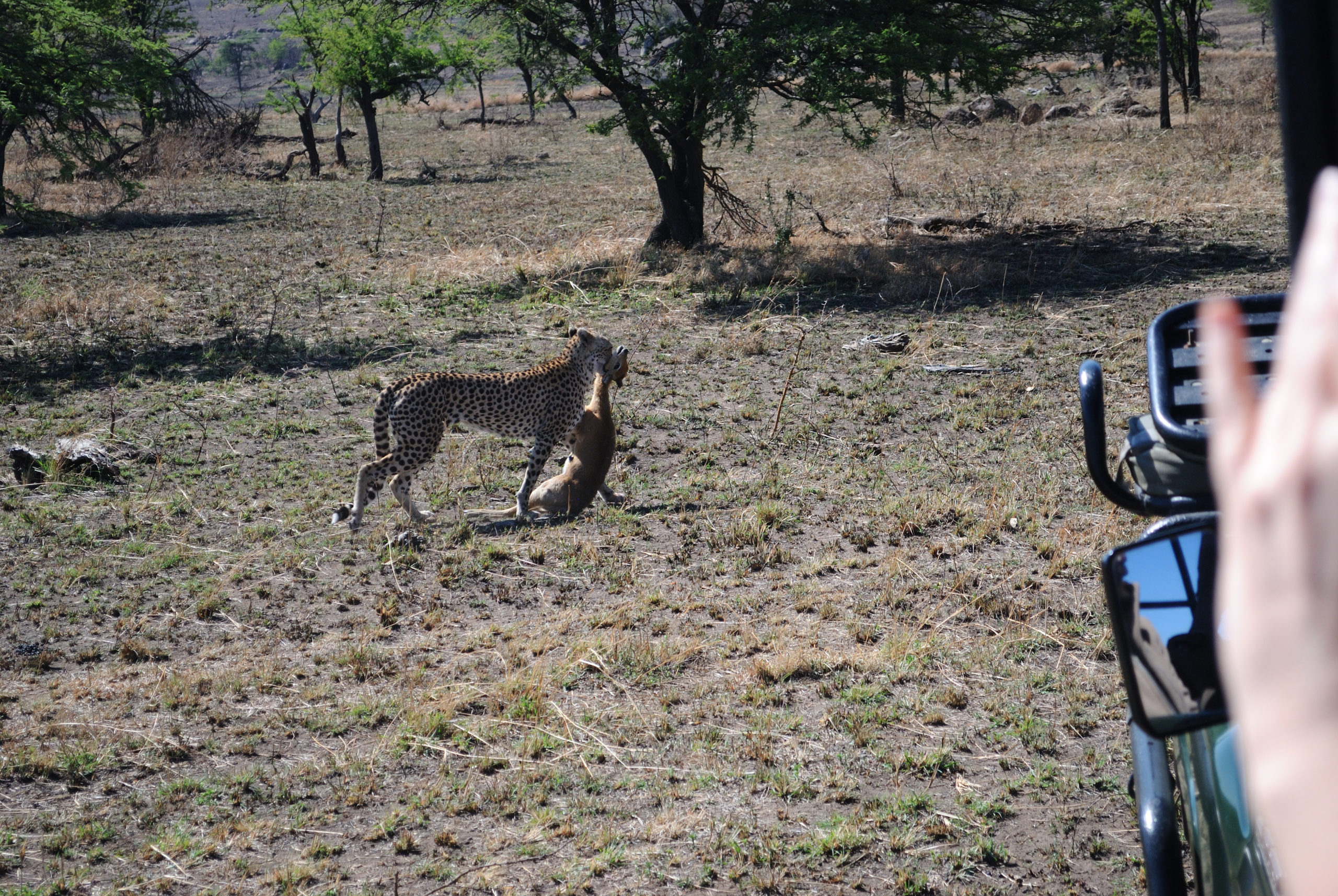 A quick Flip over The Great Rift Valley

With a small plane we were treated to the mind-blowing scenery as we flew high above the Great Rift Valley and Serengeti before returning for that all-important Gin & Tonic which had to wait as nature does not wait for you. Excitement and anticipation as we witnessed a cheetah in full flight after its prey and within a few seconds it was all over. Cheetah successful, antelope not. This made our G&T even more enjoyable.

On game drives you can expect to see large prides of lions and clans of hyenas of up to a hundred animals following Tanzania’s annual Great Migration. Every year masses of wildebeest and zebras in search of fresh grazing cross the waters of the Grumeti River, which is home to some of the largest crocodiles in Africa. Seeing these huge animal herds as far as the eye can see is difficult to explain unless you’ve seen it first-hand. After an evening of true African Hospitality, shut-eye beckoned.

A flight over The Masai Mara the Kenyan part of the Serengeti has an area of about 1,510 square kilometers. The area is situated at an altitude of 1,500 to 1,650 meters and is Kenya’s most animal rich reserve, both in terms of the number of species and in turn of numbers.

Tucked away at the foot of the picturesque Oloololo escarpment (the edge of the Great Rift Valley) in Kenya’s legendary Masai Mara National Reserve. Here, amidst the amazing year-round concentration of wildlife, including the Great Wildebeest Migration, we were able to enjoy another mind-blowing nature experience. As we sat back around the camp-fire and reflected on our journey while enjoying the best of African cuisine imaginable we realized that there is one thing we will never forget and that is, ‘the breath-taking beauty of Africa’ and all it has to offer.

Time to pack up and head to the tropical island of Zanzibar for the next part of our amazing African adventure. 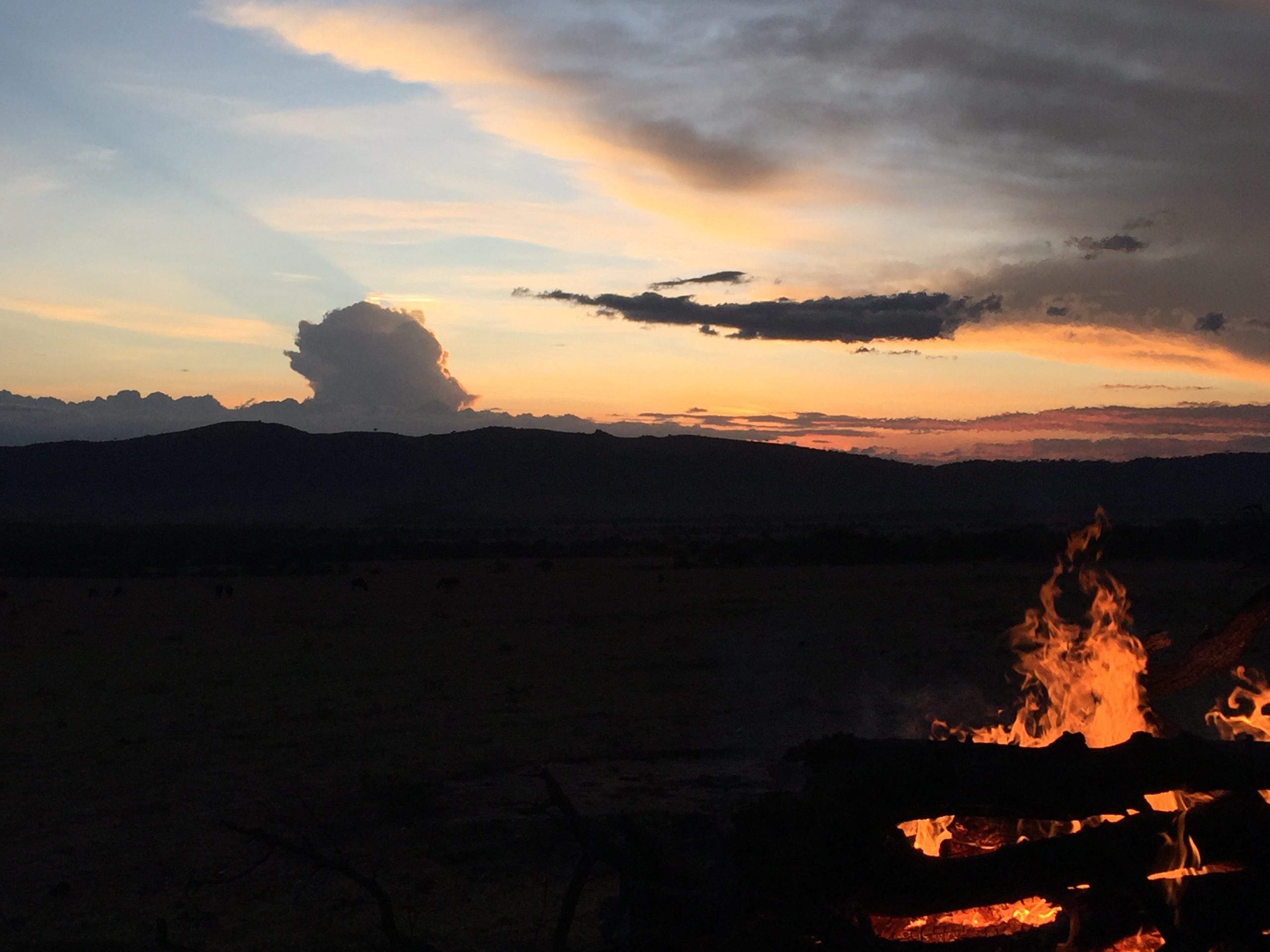 Join us for travel...

If there’s a yearning for travel in your soul, let our Instagram page ‘Inspire’ you.